Winston-Salem (2021) – The YMCA has meant something to Darle Shouse for a long time. 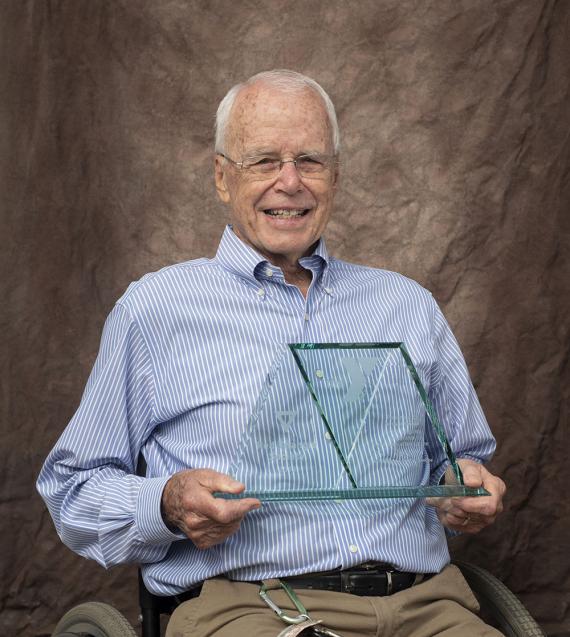 Born and raised in Rural Hall, when given the chance to swim Darle would take the bus to the Spruce Street YMCA in downtown Winston-Salem to swim. It’s here that he developed a lifelong fondness for swimming, as well as for the mission of the Y.

Darle is the newest member of the YMCA of Northwest North Carolina’s Red Triangle Society. Created in 2002, the Red Triangle Society is the highest honor a volunteer can receive. Recipients demonstrate long-term and significant commitment, enthusiasm, and dedication to the YMCA mission.

Darle, a UNC Chapel Hill alumnus, has been married to Mary Lou Shouse for more than 60 years. Together, they have three children: Mark, Ben, and Marybeth, along with several grandchildren. Darle studied pharmacy in college and worked as a pharmacist in the area for many years.

Darle has served in numerous capacities at the Stokes Family YMCA, including Board of Advisors Chair and Vice Chair, AGC Chair, CRT Committee Chair, and others.

Darle Shouse is a true ambassador of the YMCA. He embraces everything he does with a positive attitude and determination. His smile and positivity is contagious! Darle is a true leader, an empathetic listener, and a guide to many. He has served as an encourager and has provided guidance and historical reference for many Y Staff. Darle has taught patience, determination, understanding, and caring to many through his actions.

Darle has been a donor to the YMCA since 1995 and continues to support the Y mission of “helping all people reach their God-given potential in spirit, mind and body.”

A video of Darle’s contributions can be viewed here: